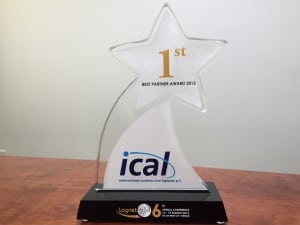 It is with great pleasure to announce that ICAL has won the Lognet Best Partner award for 2015. The Lognet Global Network consists of 353 Logistic companies worldwide with 626 offices throughout 105 countries. This year, company directors Mark Coleman and Andrew Grima attended the annual conference in Ho Chi Minh City, Vietnam. The Lognet World Network enables ICAL to connect to Lognet members globally and expand our service offerings in order to provide our customers comprehensive and competitive logistic solutions in all markets around the world.

Each year, the Lognet member companies nominate a company they believe has offered the best service and support throughout the year. In recent years ICAL’s services have been recognised, achieving 3rd and 2nd place and this year out of the 353 companies, ICAL had the honour of being awarded 1st place.  The award recognizes ICAL’s services in forwarding, customs clearance, transport and accounts.

Papua New Guinea financials are weakened; in an attempt to maintain the falling exchange rate of the Papua New Guinea kina, the Bank of PNG has been restricting the access to foreign currency. This has lead to a backlog of PNG businesses unable to obtain foreign currency in order to pay Australian exporters. It is advised exporters to PNG be mindful in their dealings in order to avoid being affected.

India and Australia are facing difficulties in concluding years of complex negotiations regarding a Free Trade Agreement (FTA). The Indian market offers great potential for Australian importers and exporters, already the world’s third largest economy, growing by over 7% annually. India has taken over Australia to be the world’s seventh largest agricultural exporter. In previous Indian Free Trade agreements agricultural products tended to be excluded but Australia’s push to have them included in a deal would be a major achievement. As negotiations enter their final stages, other sectors such as engineering, health, education and construction are considered to be of focus in the agreement. Whilst Australia continues to make announcements of extended deadlines for the finalisation; India has announced trade negotiations will be delayed until the conclusion of the Regional Comprehensive Economic Partnership (RCEP) of which both countries are a part. Given there are RCEP negotiations to be held in April and June this year, it is unlikely that a FTA would be signed by mid-2016 as estimated; realistically it will be towards the end of 2016.